Netflix's new series Sex/Life has got everybody talking recently and Aussie actor Adam Demos is the person of interest.

And boy does he. The racy sex scenes have got viewers feeling a bit hot under the collar - in particular, that shower scene where viewers see Demos' penis. And no, the actor confirmed he didn't get a body double to do it, it was all him.

But you wouldn't be wrong if you thought the chemistry between Brad and Billie was too good to be just acting.

Here's everything we know about Adam Demos and Sarah Shahi's relationship off-screen.

Adam Demos was born in Wollongong, New South Wales, Australia in 1985, making him 36-years-old at the time of starring in Sex/Life.

Demos has always had an interest in acting, but he didn't seriously start pursuing a life on screen until he was 23-years-old. Until then, he was a construction worker for his dad's demolition business.

Best known for his role as Jake Taylor in the hit Netflix film, Falling Inn Love, the strapping actor is around 6ft 1 inches tall, which is roughly around 1.85m.

Since meeting on the set of Sex/Life, Demos and co-star Shahi, age 41, have struck up a romance off-screen too.

Sex/Life writer and creator Stacy Rukeyser then commented "You're welcome," proudly claiming the role as matchmaker. 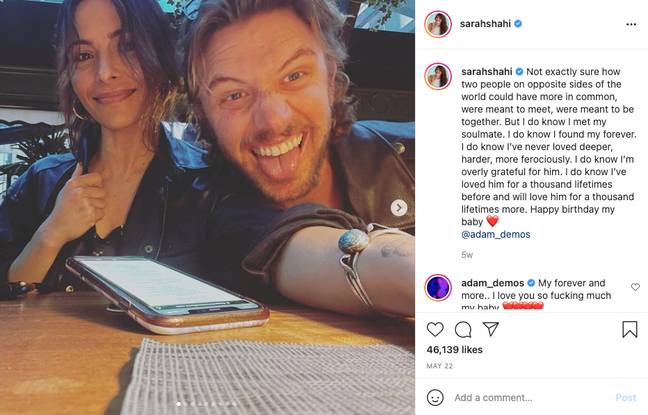 Sarah Shahi and Adam Demos are together (Credit: Instagram/sarahshahi)

No. The two are for sure very loved up with one another, but we're not hearing wedding bells just yet.

With the two describing each other as "my forever and more," it would hardly be surprising if the couple did eventually tie the knot.

The pair have three kids together: William Wolf, was born in July 2009, and twins Violet Moon and Knox Blue, who were born in 2015.

Due to "irreconcilable differences," between Shahi and Howey, the two separated in April 2020 and Shahi filed for divorce the following month. That divorce was finalised earlier this year, according to Meaww.

Speaking about her role in Sex/Life, Shahi told Vogue Australia that she saw a lot of herself in Billie Connelly, her character.

"There was just a part of me that so desperately felt that I was settling, and that I wanted more than what my life was offering, much like Billie. I saw a lot of myself in her."

Sex/Life is available to stream now on Netflix, while we all eagerly await the announcement of season two.

Ghislaine Maxwell's Lawyers Have Filed For A Retrial

Plan B Covid Measures To Be Scrapped In England Next Week