The 24-year-old shared a screenshot of a cute little puppet, which features in the advert, on Twitter where he wrote he was 'pleased' to be involved.

I mean, you cannot deny that likeness, can you?

Fans loved his humorous observation, with one person replying: "You just won the internet @LewisCapaldi Made me spit my coffee out."

Even the official Specsavers account got involved, posting: "These spot the difference games are getting hard!"

Someone else said: "I am howling."

While a third joked: "They just threw together some random reels, and sat Lewis Capaldi on a Bus. 2/10, this year is over."

Until the advert dropped, Capaldi had actually been bookies favourite to sing the song on this year's advert-which ended up being sung by BRIT award winner Celeste.

Back in October, odds of Capaldi being snapped up by John Lewis were cut to 2/5.

A spokesperson from Betway told Metro: "The release of the John Lewis Christmas advert marks the start of the festive season and each year the retailer aims to win over the hearts of the nation.

"It'll be difficult to top last year's The Boy and the Piano which featured the legendary Elton John.

"Although Lewis Capaldi and Ed Sheeran are front runners, originality in advertising is key and we might see a Christmas surprise from the retailer!" 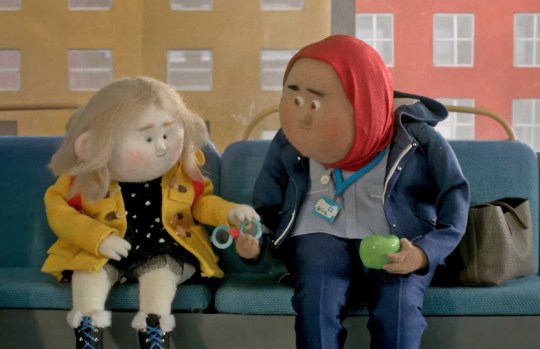 This year's 'Give A Little Love' advert is a joint effort from John Lewis and Waitrose is focuses on small acts of kindness and shows nine different scenes in which people (both live-action and animated) help each other out in various little ways.

The advert starts off one youngster helping out another after his football gets stuck in a tree and ends with Lewis Capaldi... sorry, I mean, a little girl getting her glasses fixed by a nurse on a bus.

As well as being fairly heart-warming, John Lewis and Waitrose are also hoping to raise raise £4 million for charities Home Start and FareShare.

The retailers say there will also be an additional £1m donated by their stores branches to help local charities that are supporting struggling families this Christmas.

Renter shares disbelief after landlord charges them for keeping goldfish

Dad of two on £30,000 a year asks Martin Lewis if he's better off being on benefits