What Is This New Hangover Pill And How Effective Is It?

A new supplement designed to reduce the effects of hangovers is on sale in the UK, with the product selling out following extreme demand over its release.

Myrkl, marketed as the 'first product in history to break down alcohol effectively', has been touted as a method to reduce the short-term effects of alcohol consumption such as feelings of euphoria or anxiety.

The company claims that its aim 'is to help everyone wake up at their best the next day, and to not compromise, whoever they are'.

Myrkl works by using a formula of gut-friendly bacteria that break down alcohol into carbon dioxide and water in the intestines before reaching the liver.

According to the results of an independent clinical trial, 70 per cent of alcohol was broken down after taking Myrkl within an hour of consumption. 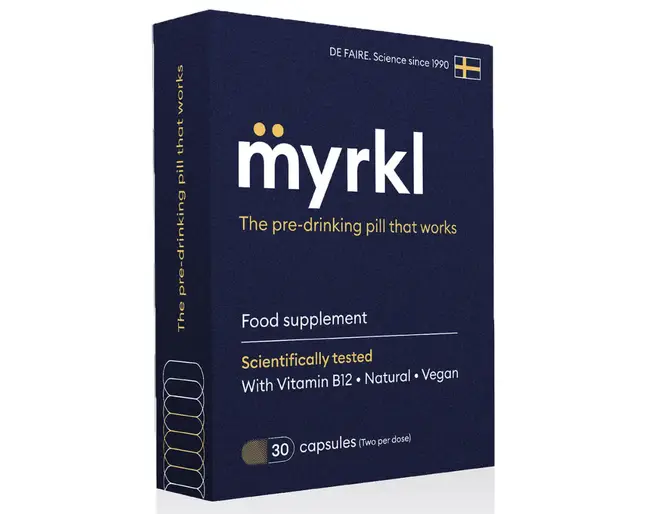 It is recommended that two pills be taken between one to 12 hours prior to drinking alcohol to achieve the desired effect.

However, the effectiveness of this drug has currently only been tested in a single research study with 24 participants, meaning data on broader population groups is currently limited.

Honorary Associate Professor in hepatology at the University of Plymouth Ashwin Dhanda has questioned the study's effectiveness on groups beyond 'people who are not young, healthy and white', as per The Conversation.

Dhanda also argue that more studies must be conducted to test the true efficacy of this product.

The pill is not intended to be taken to combat heavy alcohol consumption.

Instead, its main aim is to help moderate drinkers with feeling refreshed the day after drinking.

So, while social drinkers may find benefit in this product to help them get through a tough day's work after a night out, it’s not a miracle hangover cure that will save you from the effects of multiple rounds of tequila shots.

More information about the pill can be found on Myrkl’s website and remember to drink responsibly.

an hour ago
Entertainment

Liam Gallagher gives health update after getting ‘drugged up’ for surgery

Dad of two on £30,000 a year asks Martin Lewis if he's better off being on benefits