an hour ago
Advert
10

Floyd Mayweather and Conor McGregor are reported to have made $100 million (£77m) and $30m (£23m) respectively for their fight on Saturday night in Las Vegas. But they weren't the only ones who profited from the event.

Thousands of punters who stuck with the smart money of a Mayweather victory found themselves quids in following the match - and that included international playboy Dan Bilzerian.

As proven by this betting slip: 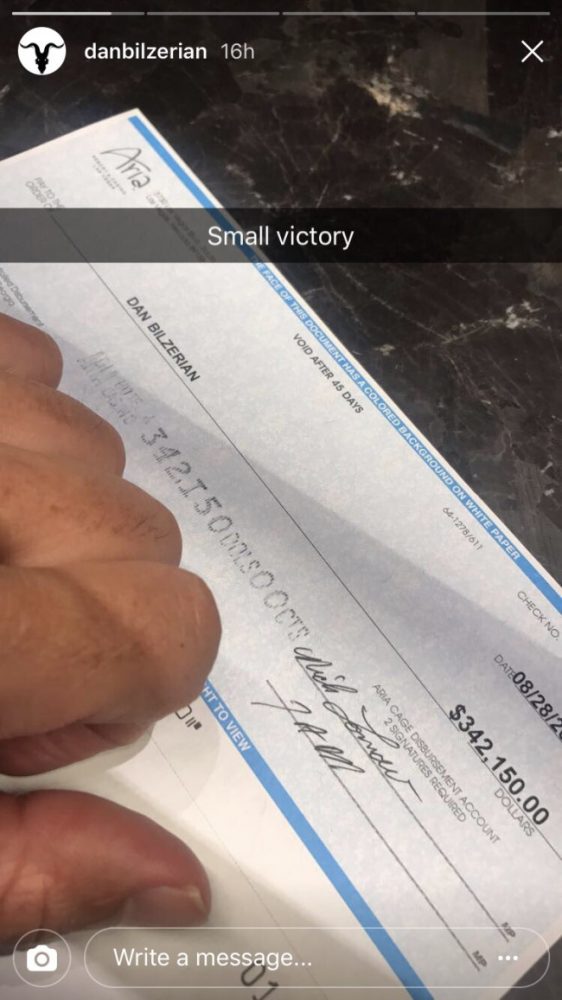 And it's probably no surprise he saw fit to congratulate 'Money' Mayweather in person following his win.

Congrats champ #MoneyMakesMoney #YouDidHaveMeSweatingThough
A post shared by Dan Bilzerian (@danbilzerian) on Aug 27, 2017 at 12:01am PDT

It seems everything's coming up Milhouse for the playboy at the moment - it was reported last month that he is now in his first monogamous relationship.

'Money' Mayweather Reveals How Much He'll Earn From McGregor Fight

Dan Bilzerian Claims He Once Won $12.8m From Poker In One Day

According to the Daily Mail, the millionaire poker player is dating model Sofia Bevarly.

Square Mile magazine claim that Dan met the model at a pool party, but it wasn't a case of locking eyes from across the room and then going on a string of dates, like they do in soppy romcoms. Instead, it was more of an extreme American Pie-type meeting, as he reportedly slept with three other women that night before meeting Sofia.

"Yeah. Got a girlfriend. First time. Well, I had a girlfriend before, but I was still fucking other girls," he charmingly told Square Mile. "Wasn't exactly your storybook love at first sight.

"I think I fucked like three girls before her that day. We just started hanging out. She's just a little different, you know?

And they say romance is dead.

Boris Johnson Announces Schools Are Set To Reopen On 8 March

James Dawson is a Journalist at LADbible. He has contributed articles to LADbible’s ‘Knowing Me, Knowing EU’ series on the EU referendum, the 'Electoral Dysfunction' series on the 2017 general election, the ‘U OK M8?’ series tackling mental health amongst young men, and for its ‘Climate Change’ initiative in partnership with National Geographic.